How wine is made 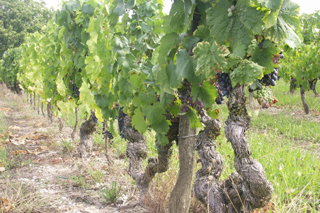 What many people don’t realise is that wine is fully an ‘Agricultural’ product. There are factories which manufacture branded wines from imported grape juice, but real wine has a direct connection with the land and the farm/vineyard it came from, it s a product of the land. The best wines tend to come from vineyards where that connection with the land is very much in evidence. Where the reputation of the vineyard is very much dependent on the quality of the wine it makes, rather than a marketing campaign. And, that quality is completely reliant on the care that was taken in the vineyard in producing the grapes. It’s a connection any mass produced wine looses.

This whole connection with the land, climate, soil, geography and even the ‘human’ care taken in the vineyard, the French call ‘Terroir’. There isn’t really an English translation of the word, but it entails all the natural and man-made influences on the wine.

‘How wine is made’ really starts with the choosing of the land and the planting of the vines, the choosing of the variety and how then you ‘tend’ the grapes up until harvest. Today very scientific processes go into choosing which variety to plant where, given the soil, climate etc (i.e. ‘Terrior’). But then again history and hundreds of years of experience have already dictated to Old World wine regions which vines grow best in it’s ‘Terrior’. That doesn’t mean wine making in these areas hasn’t benefited highly from technological progress, especially over the last 30 years most Old World regions have benefited greatly from a more scientific approach to wine making.

Once the grape varieties are chosen, wine growers will tend their vines and process the different grapes to their own traditions and preferences. In some regions the resulting wines tend to be blends of those grapes chosen to be planted within the vineyard. For instance if the vineyard is on a hill, one variety will grow better at the top, another on the slope down the hill, another at the bottom – a system well used in the Bordeaux region. However, all the varieties are processed separately before any blending is done. As the blends of grapes vary between regions, so the precise vinification processes can vary between different regions and Appellations and even each château leaves it’s own individual mark on each wine vintage as does the different weather the vineyard experiences each year.

With all this in mind the following is very much a general guide to how wines are made.

At harvest time, the healthiest grape clusters are picked and transported back to the winery where they are loaded into a machine that de-stems and gently crushes the grapes to release the juice called “must.”

Red: The must and skins are transferred into a fermentation vat which can be made of stainless steel or wood. Some older vineyards still use Concrete vats.

White: Sulphur dioxide is quickly added to the must to prevent oxidisation which would result in a less fruity wine, then the skins are removed from the must before it is transferred into a fermentation vat.

Natural yeast is present on grape skins, it gives the skin that cloudy look whilst on the vine. In the vat the natural grape sugar is converted into alcohol by the yeast (which is sometimes supplemented by the addition of special yeast strains).

Red: Alcoholic fermentation takes place over a period of 5 to 10 days. Most red wines are fermented to complete dryness, with little or no residual sugar remaining.

White: Alcoholic fermentation for white wine lasts longer than for red — 12 to 15 days — and at cooler temperatures so that more of the juices’ natural aromas are retained. Dry white wines are made by allowing all of the grape sugar to turn into alcohol. 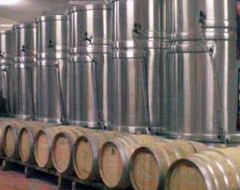 Red: Some producers leave the juices to soak with the skins, pulp, pips and dead yeast cells (together called “marc”) for up to 18 days during which time the alcohol extracts pigment, tannins, and favours from the marc.

Fermented grape juice (called free-run wine) is separated from the marc and the marc pressed to extract any remaining wine. This wine, called ‘vin de presse’, has highly concentrated favours, tannins, and colours and may be blended back into the wine to achieve the desired style and favour.

This sometimes is performed most on red wine production rather than white. It sometimes occurs naturally but can be induced by the winemaker. ‘Malolactic’ fermentation as it is sometimes called converts malic acid to lactic acid which lowers a wine’s acidity and makes it softer and more pleasant to drink. In white wine production, Malolactic fermentation risks lowering the wine’s acidity too much, so it must be accomplished with great skill and subtlety.

Next the wine is ‘racked’, which separates the clear wine from any remaining particles from the marc. An alternate way to clarify a wine is to introduce a substance called a “fining agent” which causes solid particles to fall to the bottom of the container for removal. Egg whites are commonly used as a fining agent. Filtration and the use of a centrifuge are other clarification methods.BlendingThe winemaker may combine the wines made from different grape varieties to create the desired bouquet, style and flavour desired of the wine. 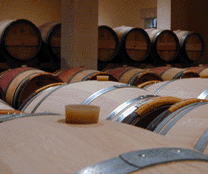 Red: Wine may be aged for up to two years in oak barrels which impart structure, additional tannin and favour. Finally, the wine is bottled and stored in cellars for further ageing, or sold on.

White: Ageing is much shorter for white wines than for reds. Some may be aged for up to one year in oak barrels which give the wine additional structure and favour. However, most dry white wines are bottled within a year of harvest.

Most of the grapes used for sweet white wines are left on the vine until ‘noble rot’ appears. They are not ‘rotten’ as such, but a fungus called ‘Botrytis cinera’ causes water to evaporate from the grape, in a similar way to the production of raisins shrivel the grape. The resultant shrivelled grape has a very high concentration of sugar. Grapes are usually picked over a longer period of time than red grapes, only the ripest and sweetest being picked on each harvest.
Some countries use other methods are used to ‘dry’ the grape. It could simply be leaving the grape to go over ripe (late harvest), or picking the grapes and leaving them some where to dry out. In Italy this traditionally has been done by leaving whole bracnches in the loft space of a barn for a year. In other places the grapes are laid out to dry on straw mats in the sun. In Germany the gapes are left on the vine till the first frost and then harvested (known as Ice Wine). The frozen water separates and concentrates from the juice.

Because the grape has such a high density of sugar the natural yeast can only turn a proportion of the sugar into alcohol before it dies, stopping fermentation and leaving up to 12% residual (unfermented) sugar in the finished wine.

After blending, sweet wines are usually aged for up to three years in oak barrels to increase richness before bottling and distribution.

"Based in the foothills of the Pyrenees, West of Perpignan, the Vineyard has a large divers..."

"Sometimes I think we only see the 'bottom end' of wines from the New World here in the..."

"Made from the little known Italian grape Fiano, when I first sampled this wine I just thou..."

"The Castaño family has 410 hectares of vineyards in Yecla in south eastern Spain. They ha..."

The Wine Review is designed and themed by Mike Bird